We are doing an early thanksgiving giveaway to our users! Follow us and retweet for a chance to win 150 $XRP or 555 $XLM! I will also be doing an AMA on TikTok with tiktok.com/@zeedood on November 20th at 8pm UTC. So if there are any questions you want to be answered, come join the live! 😊

Where Is The Final Bottom?

In this edition, we will update you guys on an article we wrote last month, “Where is the Final Bottom.” In that previous article, we outlined the case for a $12,000 – $15,000 final price target for Bitcoin. We will cover recent events and how that price target plays out.

After the FTX collapse, Bitcoin aggregated Open Interest for futures contracts decreased by 40%, about $5 billion from top to bottom. Futures contracts are often used to indicate the market’s leverage, allowing traders to trade from 5x – 100x their actual portfolio size.

Now, if you don’t know, leverage and liquidations are the reason for wild swings in the price of crypto and the downfall of huge funds (Ex 3AC). There will for sure be a contagion risk with the fall of FTX. Similarly to 3AC, they have large counterparties from whom they borrowed money, and those counterparties will be forced to sell whatever coins FTX posted as collateral. Not to mention the billions now stuck on the FTX platform from funds, retail and professional traders. Bankruptcy proceedings will take a long time, and it seems like those leftover assets will be forced to hodl for now. However, as we had seen from the Luna crash after the initial drop, the contagion has not fully spread, and it might take time for the other dominos to fall. A second wave of FUD and forced selling is highly likely to occur. 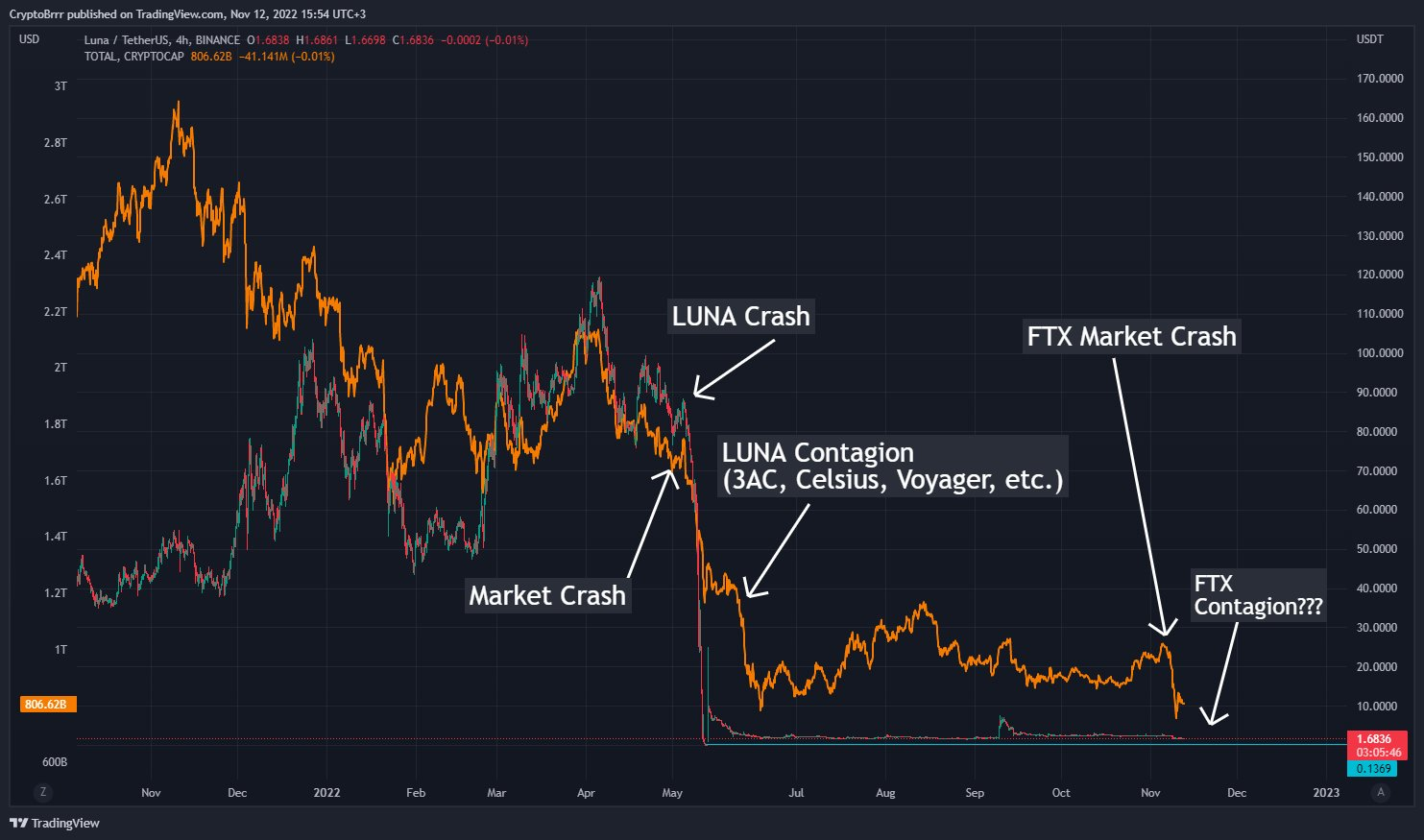 Looking at the percentage draw down from ATH to bear-market lows, we can see in the previous 2 bear markets, 2015 & 2018, both had 82-83% drawdowns before a low was established. Before the recent drop, we were near a 72% drawdown from ATH to recent lows of $17,500. Many thought this would mark the bottom, but as we have told readers, the macroeconomic risks of war, inflation, recession, and supply chain issues are unlike anything Bitcoin has been through before. We expect an 80-85% drawdown similar to previous major bear markets.

The chart below shows that the lower bound of our $12,000 target coincidentally marks the 82% drawdown from the ATH in Bitcoin. This level also marks the start of the 2020 bull market. The starting point of a cycle has historically been a level that prices tend to revisit. Looking at the right of the chart, we see the volume profile. This represents the number of transactions done inside that price zone. We can see a high amount of volume transacted at the $12,000 price area, which means increased demand and a more stable market structure. Looking at the volume profile between $16,000 – $13,000, we see a lack of volume traded, representing a poor market structure. This means that there is a lack of support in that area, and sellers will have the advantage.

Next, we are looking at the shutdown price for each popular generation of Bitcoin mining machines. The combination of increasing hashrate (pushing up the difficulty as a result), rising energy costs, and declining prices have led to increasingly stressed economic conditions for Bitcoin miners. The newest and most energy-efficient model has an approximate shutdown price of $12,000. (The shutdown cost differs depending on your electricity cost) This is important because, in previous bear markets, the price of Bitcoin has typically dropped to the shut-down level for the best-equipped miners, causing a decline in the network difficulty due to the shutdown of machines. $12,000 is the approximate level for many miners to close up shop. Last week, Core Scientific, one of the largest mining companies, filed with the SEC to stop paying interest on their debt. They are effectively declaring bankruptcy. So we are already seeing energy costs and price pressures on even the largest miners.

Now switching over to options open interest data, we see a large block of options surrounding the $15,000 strike price for November 25th and December 30th. If we follow the theory that the market wants to inflict the maximum pain on the most participants, then Bitcoin should trade between $15,000 – $17,000 until the end of the year.

For BTC, there is a relatively clear analysis right now. We are in the middle of two important levels. On the top, we have $18,500 resistance, the level from which we just broke down. On the bottom, we have $15,000 support, where I expect to see demand from buyers and could see consolidation around this area for the next month. However, at the current price of $17,000, there is nothing for us to do because BTC could go either direction, and there is no way for us to tell. If we can reclaim $18,500, that would be a positive sign, as whenever buyers can reclaim an important breakdown level, it shows an invalidation of the downside move. However, the most likely scenario is we see signification resistance from that level and get rejected on attempts to break above it.

SPY saw a significant move last week with the help of the lower-than-expected CPI print, 7.7% YOY vs the 8% expected. This caused the probability of the Fed to raise only by 50 BP in the December meeting to shoot up to almost 80% from 50% before the CPI came out. Usually, this would have also been positive for crypto assets, but with the implosion of FTX, all this did was help stop the waterfall of sellers. Prices have played out how we expected it to for the SPY. Check out the chart below for our predicted move vs the actual move. It played out step by step as we had outlined. Today we closed right on the $400 resistance level, with the strong 200-day MA resistance above and the downtrend line connecting all the lower highs since the ATH on SPY. A reversal from the above strong resistance is likely, as SPY has done twice previously.

This week, we recommend that readers use the BTC-buy-the-dip bot with a $15,000 strike price and a 10-day – 14-day duration. This product has a high annual yield of 40% – 55% and returns 1.5% after the 10-day duration. This is the perfect way to get passive income while waiting! I would let the bot continuously generate passive income and reinvest into the selected $15,000 strike products.

No suggestion this week. There is too much uncertainty in the markets. It is best to sit in cash and let the dust settle.

Currently, we are 10% allocated in the market, with a total percentage change of -4.1% overall from 0% last week.