A lot has happened in such a short amount of time. I apologize for not being able to release information in real-time. The crypto markets move at a fast pace, and it is important to be up to date with whatever is happening in the markets. If you want real-time updates, join our communities, where members are always sharing information with each other.

In the past couple of days, a lot has happened. If you do not know what happened, here is a quick summary. If you are up to date, skip this part.

Over the weekend, Coindesk released “leaked” financials of Alameda, FTX’s sister company which showed they held A LOT of FTT on their balance sheets. A total of 6 out of 15 billion were FTT coins and have 8 billion in liabilities. 6 billion in made-up coins and 9 billion in illiquid investments. FTT is FTX’s coin that has no utility but to reduce commission costs for trading.

This all started when FTX was an infant company, and Binance was an early investor. But FTX grew extremely fast and soon became the #2 crypto exchange and one of Binance’s main competitors. CZ (CEO of Binance) decided to exit their stake in FTX a year ago, and as part of the agreement, they get paid $2 billion in FTT (FTX’s made-up coin). Now starts the good part. On Saturday, Nov 6, CZ tweeted they would be liquidating their entire $2 BILLION FTT stake because Sam (CEO of FTX) has been lobbying in the U.S. against Binance.

So this news spreads all over Twitter, and everyone is investigating and freaking out. People started looking into FTT and why the price was so high and found out that there was no reason and no use for the coin. The next day FTX had $1B+ of withdrawals in just 2 days as customers were scared and thought this could be another Luna / Celsius situation. Soon after, FTX paused withdrawals, and a couple of hours after that, Sam announced FTX entered a “strategic transaction” with Binance. CZ then cleared it up, and they signed a letter of intent to acquire FTX. With one leaked balance sheet report and what might’ve been a well-timed FUD tweet by CZ, we have just witnessed the fall of the world’s #2 crypto exchange. If Sam and FTX didn’t loan out customer funds, why did they willingly give up their exchange? They seemed to have a massive hole in their balance sheet that they could not make up.

At Pionex, we never loan out ANY of your coins. They are always ready to be withdrawn or sent when you decide to.

During the FOMC meeting last week, Powell came out with an extremely hawkish statement, and BTC moved to the downside into the $20,000 support. Even though we got the direction right, we were surprised at the muted downward move. But none of that even matters now, as we discussed above, something no one saw coming tanked the markets. During these moments of crazy news-driven action, the only thing that matters is price. Price reflects all available information in the markets and represents the equilibrium supply and demand from market participants. As prices came under our $20,700 pivot level that we had outlined multiple times in the past, I knew things were not rosy.

I tweeted out to followers that with prices under $20,700 and the MACD + TTM showing bearish signals prices could fall further. With the news of FTX halting withdrawals, BTC prices declined quickly to a low of $19,300 before bouncing back. Guess what level BTC reversed at on the bounce? $20,700, the level we had given readers last week. Prices were literally $20 away from $20,700; we cannot make this stuff up. This was a short-squeeze rally, and I liquidated most of my holding on this bounce as with the risk of the second largest exchange turning insolvent, it was better to stay on the sidelines in cash and use structured products. Soon after, BTC declined 15%, hitting a YTD low of $17,511. If you have yet to get out of your position, I will wait to see if BTC can reclaim $18,500. If prices can reclaim this level, we can see a bounce back toward $20,000. However, I would exit holdings if the price gets rejected at $18,500 multiple times. 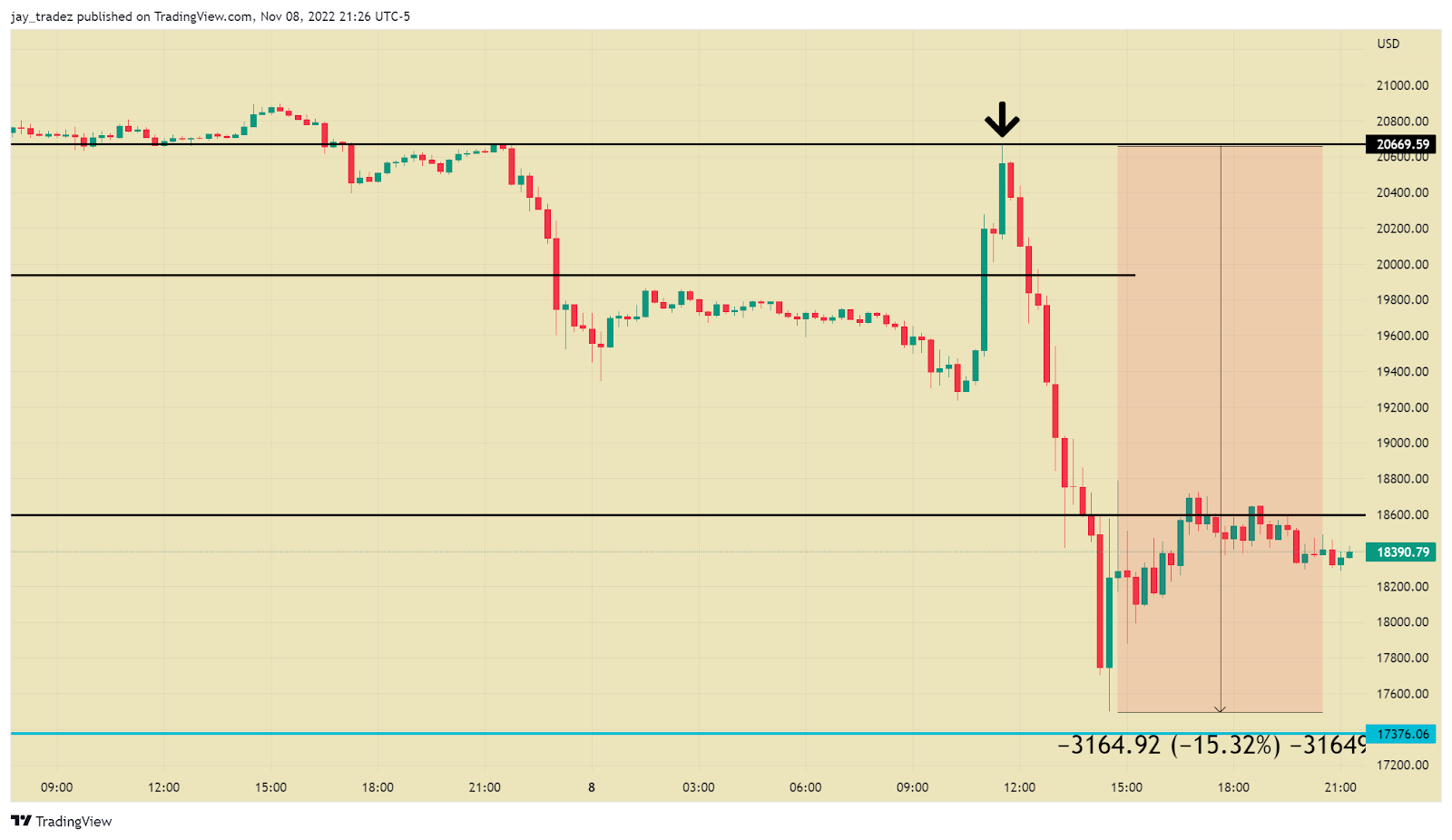 As we outlined last week, the Short-Term Holder Realized Price has acted as a dynamic supply level (selling pressure) in previous bear markets. (Chart 1) This week we hit that resistance level, marking the turning point of this bear-market rally. In the past bear markets, when we got resistance from this supply level, we saw heavy selling afterward (Chart 2). Chart 1 vs. Chart 2 below look extremely identical, and this FTX drama could just be the catalyst to send BTC prices toward our $15,000 price target.

With the crypto market-specific events that happened in the past few days, traditional equities seem to have finally decoupled with crypto, even though it wasn’t the type of decoupling we wanted. SPY followed our game plan outlined last week. After the FOMC press conference, SPY shot to the downside heavily, ending the day down 3.3%. However, prices recovered on Friday when the unemployment rate increased from 3.5% to 3.7%, which signaled the economy was slowing (what the Fed wants to see). What we discussed on SPY this week will probably have little impact on your crypto trades as crypto is dealing with its civil war right now, so we will keep it short. Expect SPY to continue this slow grind up until Thursday, when CPI numbers are released. If CPI shows under 8% YoY increase in inflation, that will be a catalyst to drive SPY towards its 200-day MA, and we can expect a continuation of the current rally. This will probably give BTC a little boost and will most likely keep prices above $18,500.

Our View: Analysis of FOMC

The press release seemed relatively dovish, and markets reacted with a bid to the upside. During the press conference, Powell dropped some bombs and went from a hawkish policy to an even more hawkish one. Not the pivot the market was hoping for.

Last week few Fed members came out to say that it might be appropriate to be soon thinking about decreasing the rate of interstate hikes. Also, as we noted two weeks ago, the Fed’s unofficial mouthpiece at the Wall Street Journal released an article stating that there would be a discussion on the size of future hikes leading to a possible pivot. Papa Powell did not just come out and crush that narrative but led with a more hawkish outlook.

As we said last week, labor markets are still strong, and inflation data is still entrenched at high levels that do not support a Fed pivot. Powell confirmed our suspicion at the press conference last week, but we didn’t expect a pivot to a more hawkish stance. Now the Fed wants higher rates for longer… all the way till the end of 2023.

Powell is signaling he will not pivot. He will do whatever it takes to end this fight with inflation and come out on top. Many data points that the Fed looks at are lagging, but they don’t have a choice, and Powell would rather over-tighten now rather than pivot too quickly and let inflation flare up twice.

You must trade on what the Fed will do, not what they should do. The Fed is looking at lagging indicators, and you can’t try to be a step ahead of the Fed. We might all think the market is going into recession and unemployment rates are ticking up, but the lagging data shows the labor market is still hot, and PCE inflation is increasing at recent highs. It is very clear what the Fed will do with the data we are seeing. It’s not a secret.

So from what we learned last week, let’s focus on the data the Fed will be watching. The next important data point that the Fed is watching is the CPI numbers for October, which come out on November 10th. Economists predict an 8.1% YoY increase, but some expect it to increase slightly below 8%. If we get a below 8% reading, we could expect an increase in the possibility that the Fed will hike rates by 50 bp instead of 75. This might provide the fuel to stabilize the crypto market. However, if we get anything above 8.1%, look for markets to break lower to the downside. This could be the catalyst that takes BTC to our target of $15,000.

We might be executed this week! I’m excited to get allocated my BTC at 18,000. Looks like our patience will be rewarded. This week we recommend that readers use the BTC-buy-the-dip bot with a $15,000 strike price and a 3-day to 17-day duration. Only invest in the product that is generating over 15% APY. Depending on the amount of cash you have sitting on the sidelines, I would put 20%-60% of my portfolio into the $15,000 buy-the-dip bot. Our $18,000 buy orders might be executed, and as we discussed, we want to layer our orders. This is the perfect way to get passive income while waiting! I would let the bot continuously generate passive income and reinvest into the selected $15,000 strike products.

No suggestion this week. There is too much uncertainty in the markets it is best to sit in cash and let the dust settle.

Currently, we are 10% allocated in the market, with a total percentage change of 0% overall from +16.8% last week.